On June 24-28, 2019, the Geomorphological and Sedimentological Summer School was held in Bachotek (Brodnica Lake District, Poland). The workshop focused on issues related to slope processes, forms and deposits of the postglacial area of North Poland. The School was organized by the Department of Quaternary Geomorphology and Paleogeography of Faculty of Earth Sciences Nicolaus Copernicus University from Toruń, with the participation of the Glacial Geomorphology Commission of the Association of Polish Geomorphologists and the Section of Lithology and Genesis of the Quaternary Sediment of the Quaternary Research Committee of the Polish Academy of Sciences. The School’s scientific leader was Tomasz Karasiewicz (Nicolaus Copernicus University in Toruń). Almost 17 participants attended the Summer School activities. Among them were young scientists from Poznań, Katowice, Gliwice, Kraków, Lublin, Łódź, Knyszewicz, Toruń, Gdańsk and Chojnice, as well as three doctoral students from abroad, i.e. from Tbilisi and Moscow. 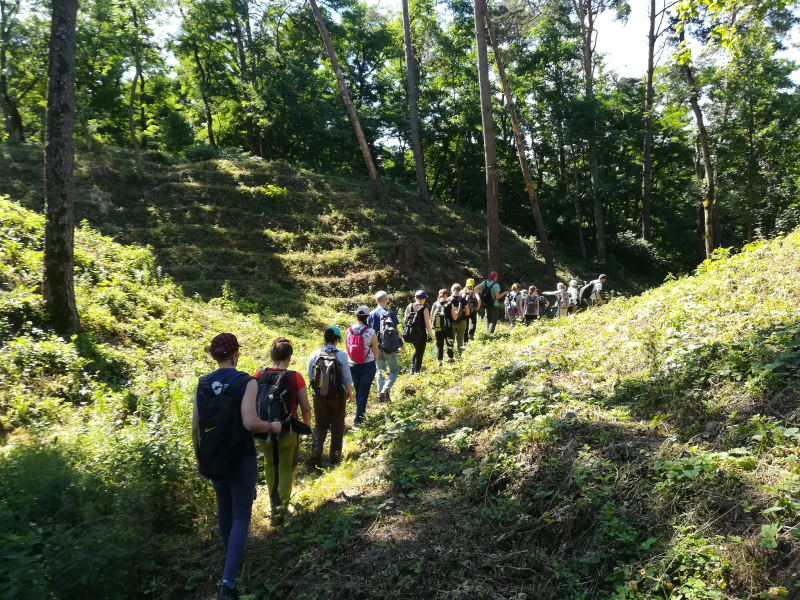 On the first day of Summer School, participants learned about issues related to geomorphological and soil science processes occurring on young glacial slopes. The first lecture was given by Tomasz Karasiewicz and Lucyna Tobojko on the subject: “Geological and geomorphological characteristics of the research area as well as morphology and evolution of erosive cuts in the slopes of the Drwęca Valley near Bachotek“. This lecture was an introduction to the geomorphological and geological issues of the area of fieldwork and the thematic scope of the Summer School. Another lecture entitled “Postglacial evolution of erosion and denudation valleys in selected edge zones of the West Pomeranian Lake District” was presented by Renata Paluszkiewicz (Adam Mickiewicz University in Poznań). Its concerned the conditions, formation, morphometry and development of erosion and denudation valleys located within four test fields in the central part of the West Pomeranian Lake District. In the third speech by Marcin Świtoniak (Nicolaus Copernicus University in Toruń) the listeners were acquainted with The influence of slope processes on soil properties of young glacial landscapes. At the end of the first day of classes Marek Majewski (Pomeranian University in Słupsk) presented the results of research on sediments and slope processes from the vicinity of Lake Jasień in the eastern part of the Polanowska Upland (West Pomeranian Lake District) in the lecture entitled “Selected features of slope sediments against the backdrop of soil sediments“. On the second day of the School, after classes in the field, the lecture on “Modelling of slope processes” was conducted by Paweł Molewski (Nicolaus Copernicus University in Toruń). 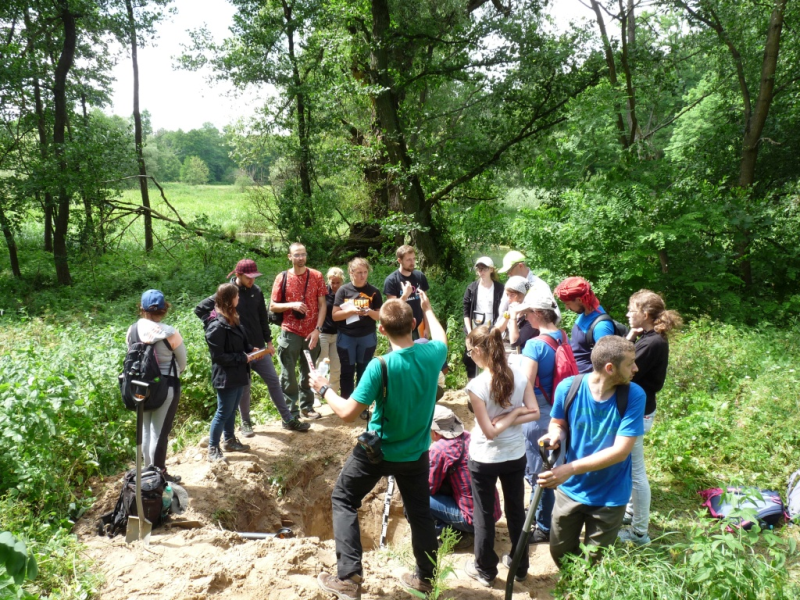 During the next three days the School’s participants conducted field research in the vicinity of Bachotek, on the slopes of the Drwęca Valley. The valley slopes on this section are cut by numerous small valleys, three of which have been the subject of detailed investigation. After getting acquainted with cartographic data, local recognition of terrain morphometry (zero-order catchment areas), participants were divided into three teams and began field work in selected erosion forms. Each group had the task of preparing drafts / exposures representing the diversity of slope sediments in the longitudinal profile of individual forms. During the fieldwork, on the third day, an example of terrestrial laser scanning (TLS) of one of the studied erosion and denudation valleys on the slope of the Drwęca Valley was performed. In the afternoon session, participants listened to a speech by Sebastian Tyszkowski (Department of Environmental Resources and Geohazards of the Polish Academy of Sciences in Toruń) “Potential of terrestrial laser scanning (TLS) in geomorphological studies“. After the lecture, practical classes using data obtained during scanning and their processing in computer programs. 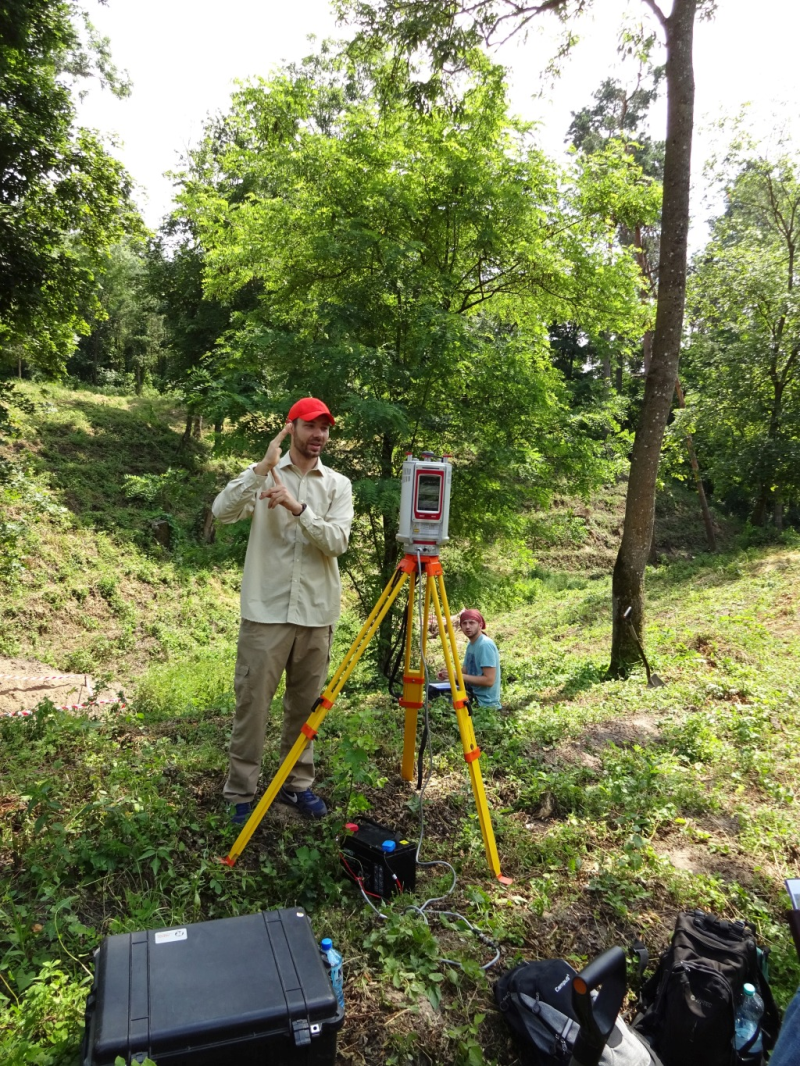 The fourth day was the last field day, during which the each research teams presented (within prepared sites) gathered previously information about the slope and base sediments as well as sedimentation structures. There was a lively discussion on the features of slope sediments and geomorphological and soil science processes in the analyzed denudation and erosion valleys. Sediment samples were also taken for laboratory analyzes. The combination of geomorphological and soil science approaches in sediment analysis has allowed for extremely interesting interpretative results. Discussion in the field of jointly prepared open pit/excavations was inquisitive, kind and inspiring. On the last day, during auditorium classes, School participants presented information about their own research projects. Due to the high scientific value of data collected during the workshops, their participants decided to develop and prepare publication containing the results of the fieldwork in Bachotek. 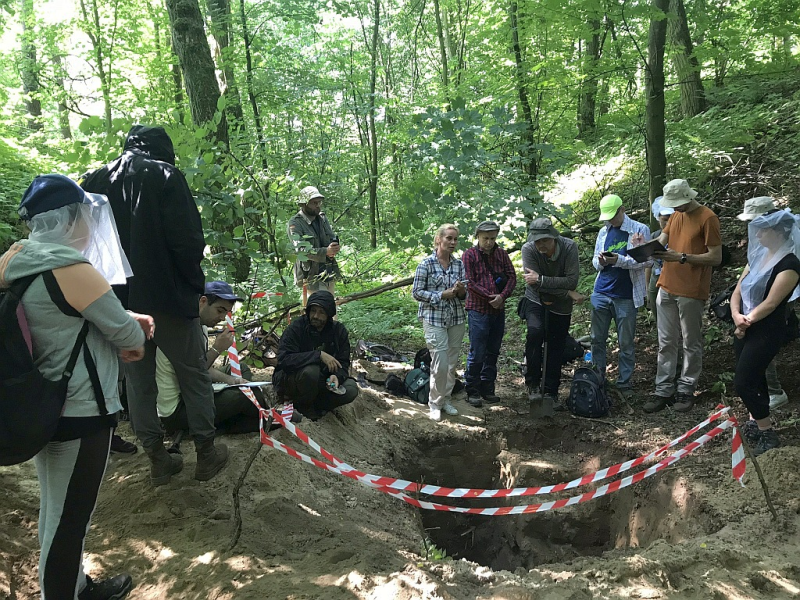