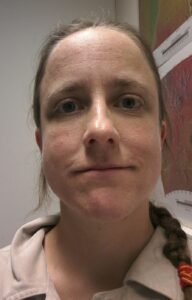 Susan Conway is a research scientist with the CNRS (Centre National de Recherche Scientifique) and works at the Laboratoire de Planétologie et Géodynamique within the University of Nantes in France. She obtained her undergraduate degree in Earth Sciences from the University of Cambridge, worked as an environmental consultant for two years and then took the full conversion to planetary science during her PhD at the Open University, UK, which she completed in 2010. Her research falls under the general theme of planetary geomorphology and specifically focusses on the use of quantitative topographic analysis to understand the role of water and other volatiles in recent landscape evolution on Mars and other planetary bodies. Her field study areas include, Iceland, Svalbard, Namibia and the French Alps. She ran the “Planetary Geomorphology Image of the Month” oh behalf of the IAG Planetary Geomorphology Working Group from 2015 until she took up her current position on the Executive Committee. She was nominated as Guest Investigator by ESA on the Trace Gas Orbiter mission in 2015 and is a member of the science teams of NASA’s HiRISE and TGO’s CaSSIS instruments. In 2020 she was awarded the Bronze Medal from the CNRS for her promising contributions to scientific research. She is on the editorial boards of ESurf and Géomorphologie : Relief, Processus, et Environnement. She has edited two special issues, contributed six book chapters and has over 85 peer-reviewed publications.