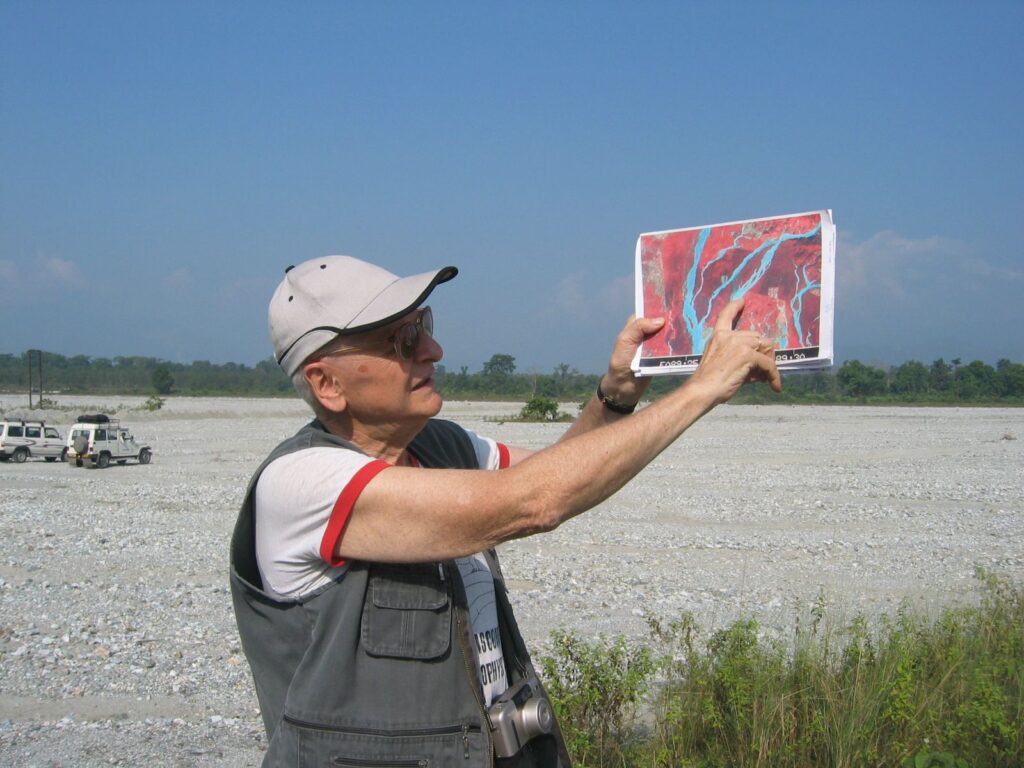 In this photograph, Professor Leszek Starkel explains how braided channel systems evolve in the front of the Himalaya,
during a field trip of the Association of Polish Geomorphologists in November 2006 (photo: Piotr Migoń).

Professor Leszek Starkel passed away on 6 November 2021, after a long illness, which must have been particularly painful to a person so dedicated to science and keen to be involved in science-related activities as long as possible.

Leszek Starkel was an eminent geomorphologist and Quaternary scientist, a leading figure in Polish geomorphology over many decades, but also a person of wide international reputation. Among the many honours he was awarded, was the honorary fellowship of the International Association of Geomorphologists was granted to him during the International Conference on Geomorphology in Zaragoza in 2005. His other distinctions included the honorary fellowship of INQUA and the Gold Founder Medal of the Royal Geographical Society. He was also a member of the Polish Academy of Science and the Polish Academy of Arts and Sciences, as well as the honorary fellow of the Association of Polish Geomorphologists. His entire professional career was connected with the Institute of Geography and Spatial Organization of the Polish Academy of Sciences.

His contribution to geomorphology is multifaceted, as he was a man with a broad range of interests, of extremely wide knowledge, vision, and an extraordinary ability to see causal relationships in nature and between nature and humans. He was also a very well-travelled person, easily handling observational evidence from various geographic contexts and geomorphic environments. Nevertheless, two geographical study areas stand out in his research career. One was the Polish Carpathians and their foreland, including the Vistula river. Although they lack the grandeur of high mountains and may seem dull, they may be also regarded as representative for medium-altitude mountains – located in the temperate environment and built of erodible flysch successions – they are subject to a variety of geomorphic processes, from weathering through hillslope to fluvial. A combination of pre-Quaternary inheritance, a record of Quaternary climate change, and a recent history of human impact, has made the Carpathians a reference area for many studies carried out elsewhere, in which the synthetic approach perfected by Leszek Starkel was used as a template. A second remarkable study area of Leszek Starkel was the Darjeeling Himalayas and the Meghalaya Plateau in India, to which he was a regular visitor since 1968. His early work on geomorphic effects of catastrophic rainfall in the Darjeeling area has become a key study, particularly for several generations of Indian geomorphologists, and the issue of hillslope-channel coupling during extreme events was among the most often addressed in his subsequent publications. He was always very fond of India and the present author had the privilege of attending a field trip to north-east India in 2006, during which we were expertly guided (but also amused!) by Leszek Starkel from one landslide to another and one braided river to another, discussing the geomorphic complexity of mountains and forelands shaped by active tectonics, weather extremes and human interventions.

Although we all realized that his departure was inevitable, we will miss Leszek Starkel very much – his insightful comments, far-reaching visions, and sense of humour. But his contribution to geomorphology will stay with us and there is much to learn from his approach, particularly for the younger generation of geomorphologists.