The International Joint Scientific Investigation on Danxia Landform in Northern Shaanxi Province was held during April 25 -30, 2019. It was jointly organized by the Shaanxi Institute of Geological Survey, IAG Working group on Red Beds and Danxia Geomorphology, Red Beds and Danxia Group of the Geographical Society of China, Sun Yat-Sen University and Yulin Municipal People’s Government.  The investigations were held in different Danxia field sites in Shaanxi Province. Prof. Piotr Migon and Dr. Filip Duszynski from Poland, Dr. Janson Knouft from the USA, Dr. Milica Kasanin Grubin from Serbia, Prof. Soojae Lee from South Korea and myself (Prof. Sunil Kumar De, India) were invited as International Experts. The main objective of the Investigation was to study the potential of the sites for Geo-tourism and the measures of their sustainability. Dr. Ren Fang, Secretary of the IAG Working Group on Red Beds and Danxia Geomorphology was one of the main organizers, contacted all of the International Experts and acted as translator. I thank the President of the International Association of Geomorphologists (IAG), Prof. Mauro Soldati, for nominating me to represent the IAG on this occasion. 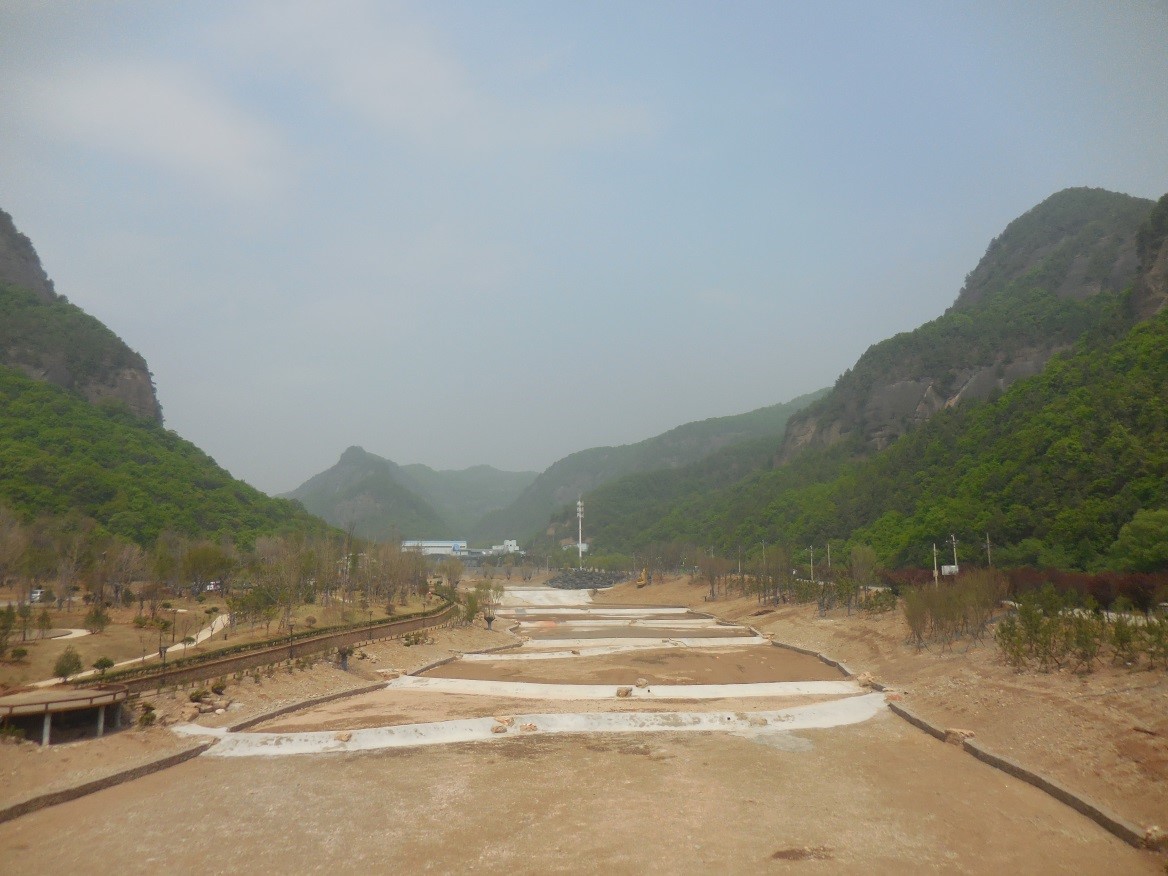 The Shaanxi Institute of Geological Survey offered the welcome dinner on 25th April, 2019. On the Morning  of 26th we left for Jingbian County. On the way we visited the Danxia Landforms in the Zhaojin area, which is already established as a Geo-tourism site although some construction works in front of the site were still on-going (Fig 1).  The site is located in the Weibei Mountains in the southwest of Tongchuan, Shaanxi province. The landform consists of gravel peaks of the Yijun conglomerate, formed in the Cretaceous period and composed of a number of vertical and horizontal trenches and streams (Fig 2). It was the source of raw materials for the painters during Northern Song Dynasty.

After visiting that beautiful site we moved to Jingbian County in the evening of 26th April. The Mayor of Zhaojin Town of Jianbian County received Piotr and I in the Zhaojin Hotel and offered us a dinner with traditional Chinese food. 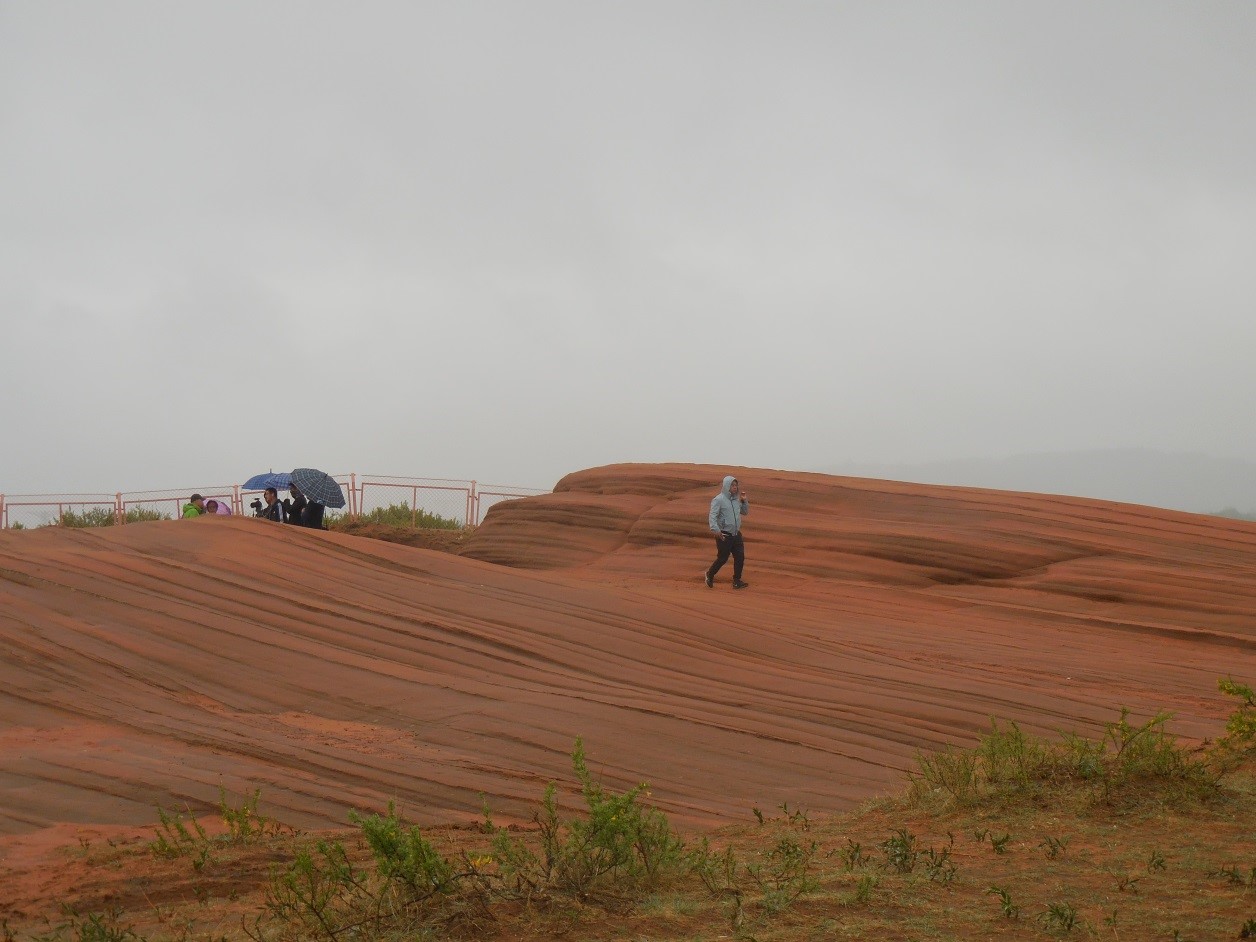 On 27th morning we left for a new site at 8am for scientific investigation, known as the Longzhou Danxia Landform. The local inhabitants had brought this landform to the attention of the local authority for its uniqueness. After several visits the local authority was also convinced to promote and take care of the area, for which the initiative was taken by the Shaanxi Institute of Geological survey. The whole area is composed of obliquely bedded purple-red sandstone of the Luohe Formation in the Lower Cretaceous (Fig 3). Afterwards it was covered with quaternary loess deposits. After prolonged period of wind and rain erosion the loess cover has been eroded and the Cretaceous sandstone exposed as a paleo landform. It was further carved out by wind and water to form the present day topography with beautiful parallel laminated layers exposed along a very steep cliff. These natural artworks show the charm of Danxia Landform. The Longzhou Danxia landform belongs to the valley-type of Danxia landform (Fig 4). 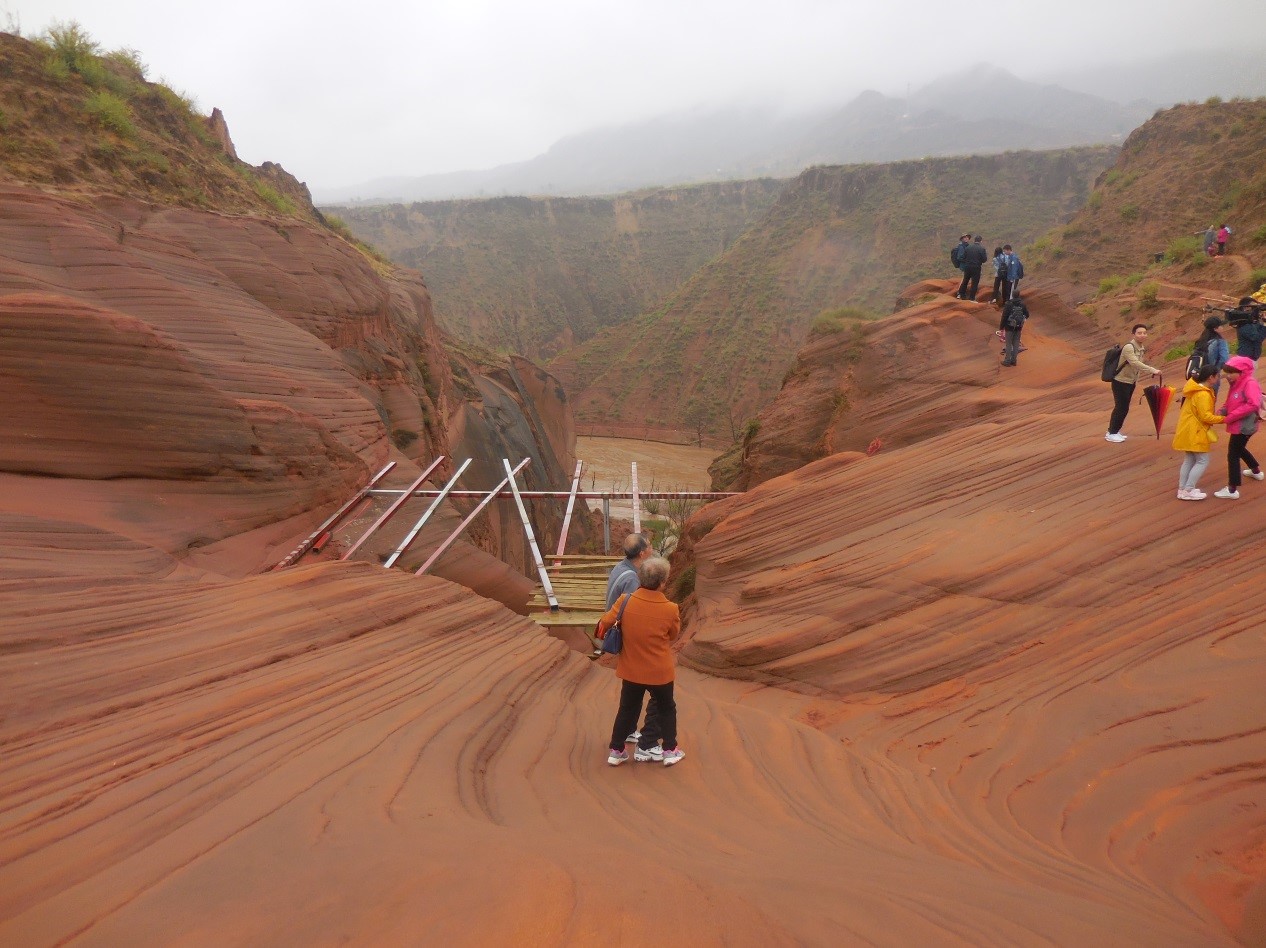 Fig.4. Longzhou Danxia Landform and its meeting with the river

We were escorted by many security, Geological experts and media people.  After visiting the whole area the media came to us for recording our opinion on the area (Fig 5). It was really an exceptional experience.

We left Zhaojin at 1.30 pm for Jingbian and arrived at Jingbian at 7.30 pm and the Mayor of Jingbian town was waiting to receive us followed by dinner. After having dinner we went out to see the Yellow River, which demarks the boundary between Shaanxi and Sanxi provinces and came back with beautiful memories. 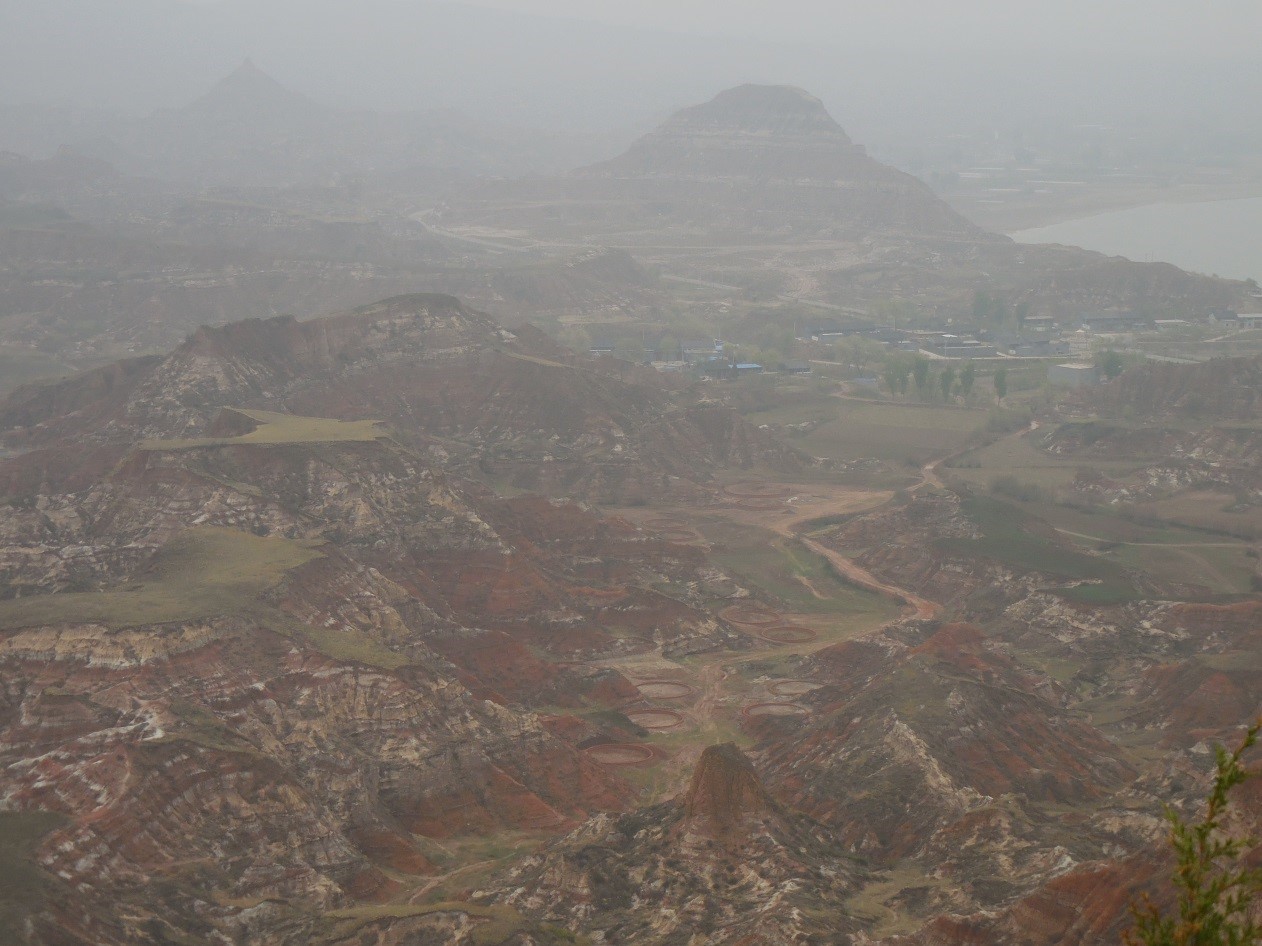 The next morning (28th April) we left at 7.30 am for another picturesque Landform, called Lianhuachan Danxia Landform. It is formed along the Yellow river and composed of red and grayish alternating layers. This landform is also paleo-topography, formed along the Yellow river during the Lower Cretaceous, covered with loess and afterwards exposed due to fluvial erosion. The whole topography carries the signatures of the shifting river course (Fig 6). The red layers are rich laterite, while the grayish layers are composed of siltstone.

On the way back we stopped on the very close the previous Danxia site to see another important geomorphic site composed of sticky clay and debris. The middle part of the slope is composed of quaternary conglomerate while the lower part is composed of a very old Upper Cretaceous sandstone (Fig 7).

We left the spot after having lunch at Fugu County for Yulin and arrived Yulin Grand Hotel at 6.00 pm. We were overwhelmed to see their hospitality. The Mayor of Yulin City came to meet us at 6.30 pm in a meeting room to find out about our experiences and receive our comments on the possibility of promoting tourism in those areas. The Mayor of Yulin province is the Minister in charge of the Science and Technology of the Shaanxi province and also a member of Chinese Science and Technology decision committee.

The Workshop on these new Danxia Sites was started at 9.30 am on 29th April at the Conference Hall of the Yulin Grand Hotel. I spoke on the scientific, academic, aesthetic and economic values of these sites as well as proposing some suggestions on the long term sustainability of these areas. Piotr deliberated in the same way. Others also cited some examples from different countries and discussed their sustainability. The Workshop came to the end at 1.30 pm. After Lunch the Chinese group left Yulin, while we moved to Mawsong for visiting the last site. 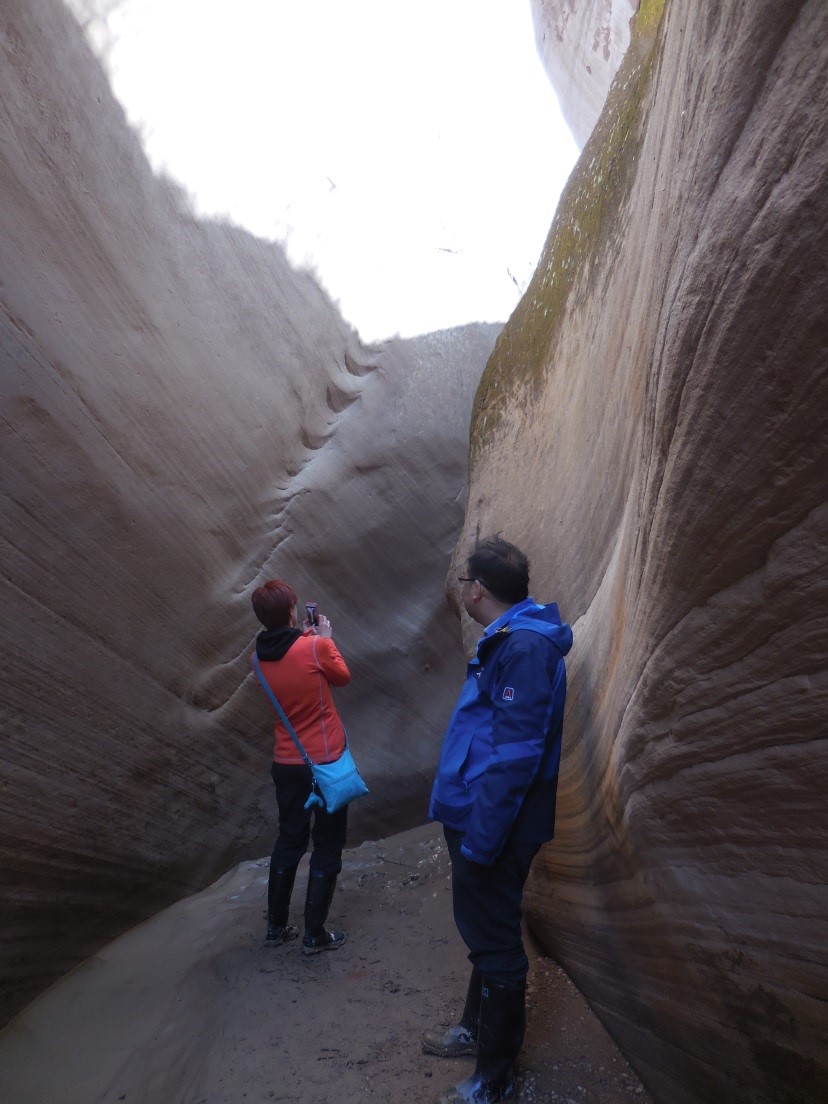 On the morning of 30th we left for Mawsong canyon Danxia site. It is a canyon about 2 km long, carved out by a tributary and has beautiful laminated beds composed of Lowe Cretaceous sandstone (Fig 8 & 9). We came back in Xi’an in the evening of 30th April. The Director of Shaanxi Institute of Geological Survey offered 6 (six) of us the appointment as the Distinguished Expert of the Institute along with the dinner. It was really a valuable honour for all of us (Fig. 10). 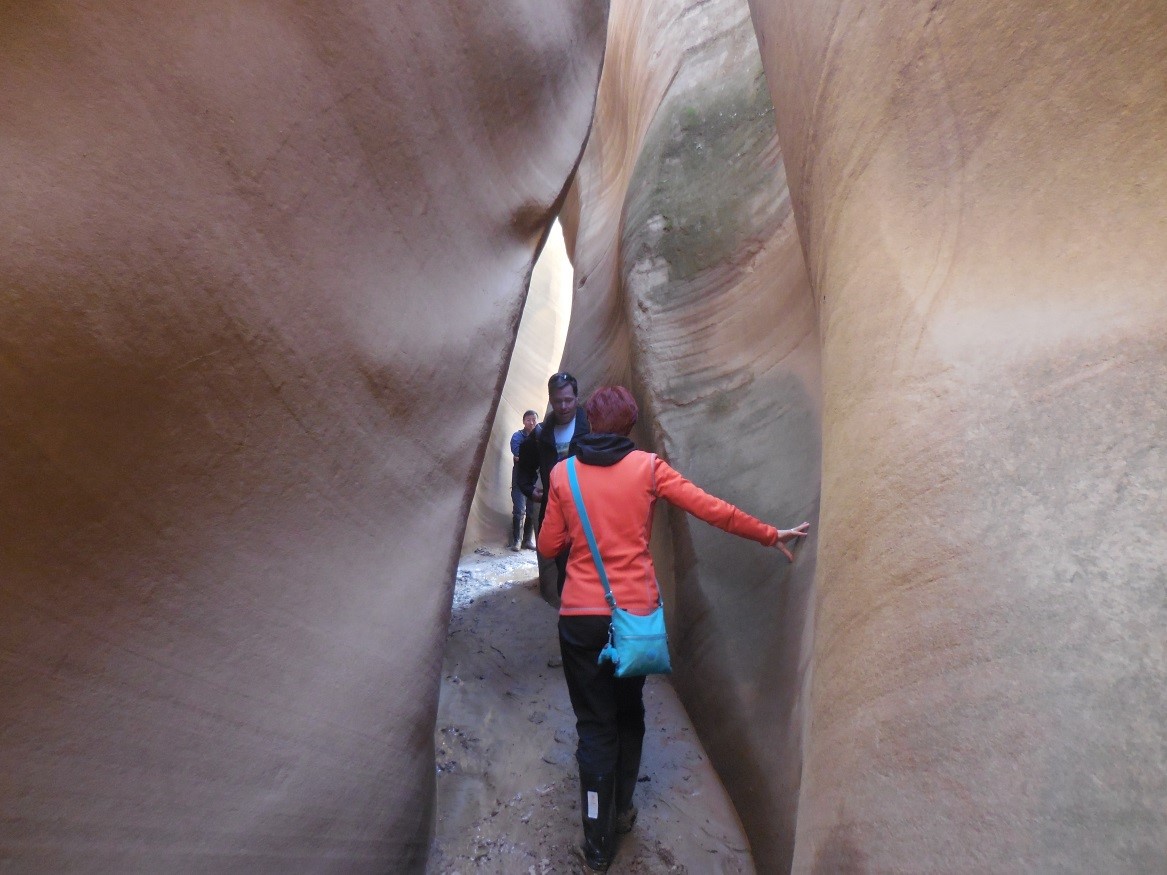 I, on behalf of the International Association of Geomorphologists (IAG), thank the Shaanxi Institute of Geological Survey (specially the Director) and IAG Working group on Red Beds and Danxia Geomorphology (Specially Dr. Ren Fang) for inviting us to share our experience and for offering us such beautiful hospitality. It is my feeling that even after the demise Prof. Peng Hua, the Red Beds and Danxia Geomorphology has remained one of the most active Working Groups of the IAG. 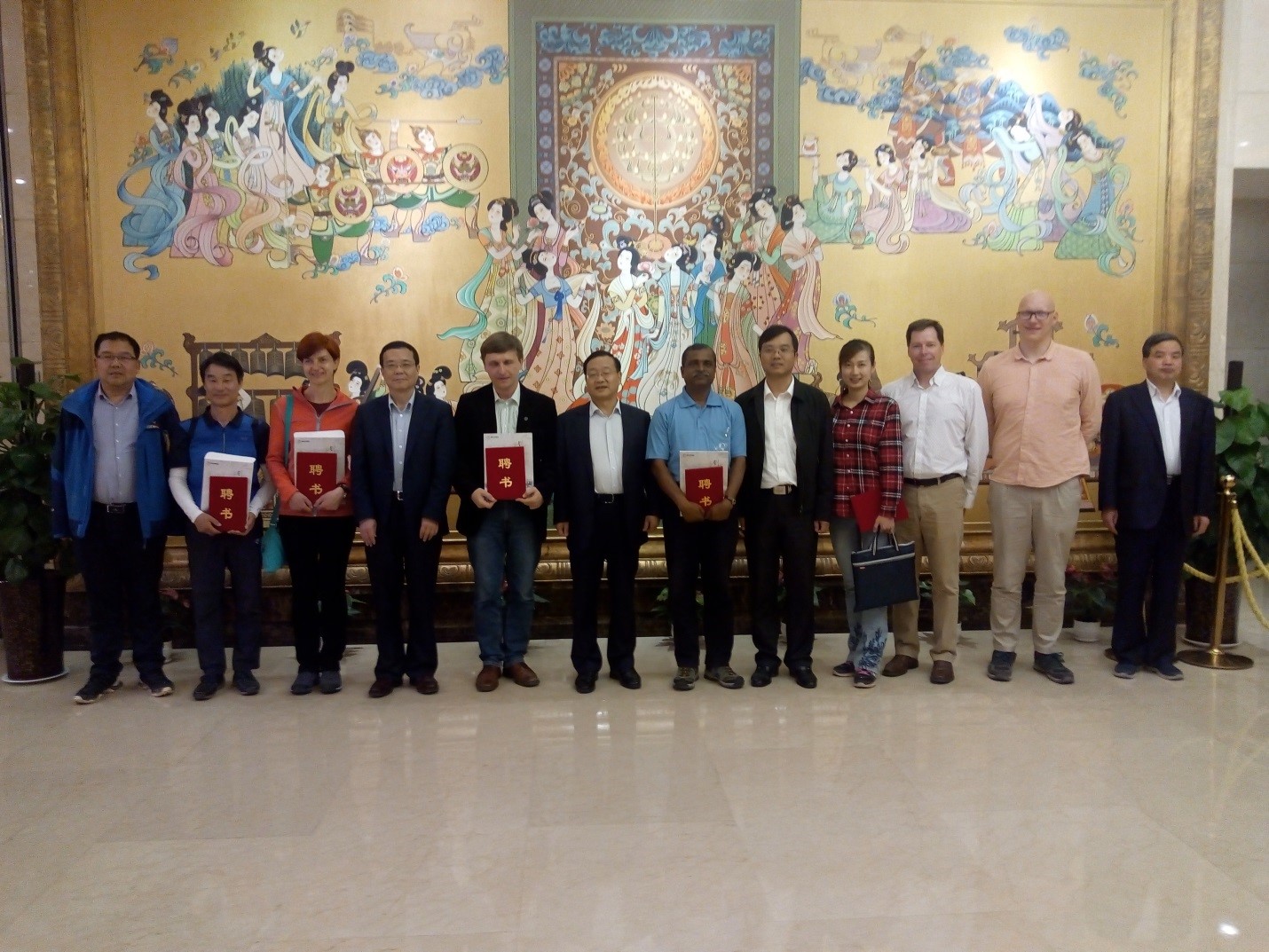 Fig.10. Expert team with the Director of the Shaanxi Institute of Geological Survey